Second planet from the sun Venus is similar in size and structure to Earth, however it has a very thick atmosphere with extreme temperatures and very high pressure. 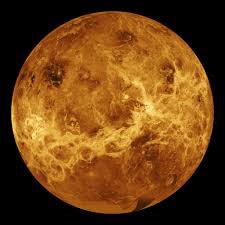 Venus is deadly! Some unmanned missions were sent to Venus,which only survived some minutes on the planet, due to the high pressure which crushed the landers. The atmosphere contains over 95% CO2, so the greenhouse effect occurs. The temperatures on Venus are over 400C, approximately 800F! The atmosphere is extremely thick , creating pressure of over 90 Earth atmospheres at the surface. That’s not all, The clouds on Venus contain sulfuric acid, so you don’t want to be there when it’s raining with sulfuric acid!

Venus orbits its axis in 243 Earth days and orbits the Sun in 243 Earth days, so one day is longer than a year on Venus. It’s axis is tilted at 177 degrees, so the North Pole is at the bottom of the planet.

At the structure, Venus has a solid metallic inner core, a molten outer core , a rocky mantel and a silicate crust, just like our planet.

Due to the similarities to Earth, Venus is also known as “Earth’s Deadly Sister”.

So the surface is lethal, than what about above the clouds? There the pressure is like at Earth, and the temperature is approximately 20C (68F), so we could live there with an Oxygen tank! NASA has a plan colonizing the sky of Venus by making floating cities! It seems to be OK, but no one knows what can go wrong!